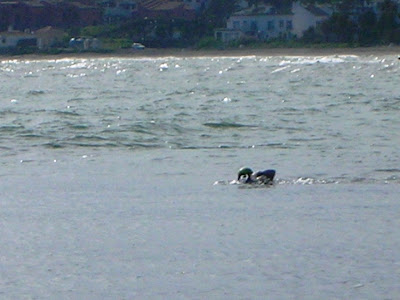 Above: Setting off for my second swim of the day on Good Friday, March 21, 2008 at "Playa Del Cristo", Estapona. You can clearly see where the sheltered bay changed to the rough conditions we had experienced earlier in the day.

Having had the swim from hell earlier in the day, we sat on the beach all day watching the very rough sea, on what was a very hot sunny day. It didn't die down at all so we had a jug of Sangria, a large portion of the excellent fish available in Estapona, while I sat there frustrated at not being able to swim properly for the best part of two days.

At about 4pm, we decided to call it a day and started to walk back to the hotel. While walking along the promenade, I spoke to a chap from the Estapona "Civil Protection". These are lifeguards who sit in towers and patrol the beach all day just like in "Baywatch" except without the girls! I asked him about swimming tomorrow, and he told me I could swim today, if I just walked around the corner to a place called "Playa Del Cristo". He gave us directions, told us it wasn't far, and so we set off on what turned out to be quite a long walk (about 30 minutes) across barren water filled land to eventually arrive at the most tranquil bay you could possibly imagine. I couldn't believe it. I'd sat on Estapona beach all day, and I could have been swimming here in a secluded bay with no waves! The walk had been worth it.

As I set off for the changing room, a "Civil Protection" truck pulled up, and who should get out? Yes, the guy who told me how to get here and made us walk for 30 minutes across water filled marshland! I had a Victor Meldrew moment! "I don't believe it! Why couldn't you give us a lift?" I said. "You are fit man. It good for you walk." he replied in pigeon English. I sort of smiled then headed off to the sea for what was going to be a very welcome swim. 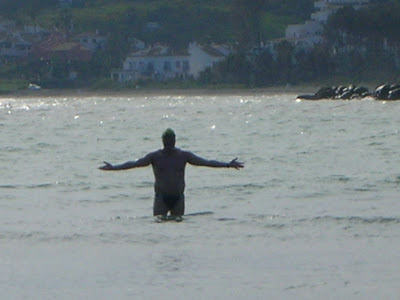 I walked in about 5 Metres, and the water came up to my ankles. About another 5 Metres and it was up to my shins. After walking in for about 5 minutes, it came up to my thighs. I turned round to look at Beccy, who looked like a blot on the landscape she was so far away and I shouted "It's too bloody shallow!". What a day! First it was too rough, then it was too shallow! I decided I had to swim, and so pushed off and swum, with my hands touching the seabed on every stroke. 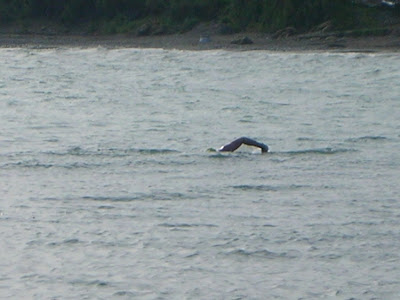 I swum about 500 Metres across the bay, and on two separate occasions, I grazed my hands on some sharp rocks underneath the sea. This is dangerous I thought. I simply did not know what was underneath these shallow waters, and so decided to head back. I grazed my hand again and decided it was best to get out. The water temperature was great at 17.5 Degrees Centigrade, but it was simply too shallow. 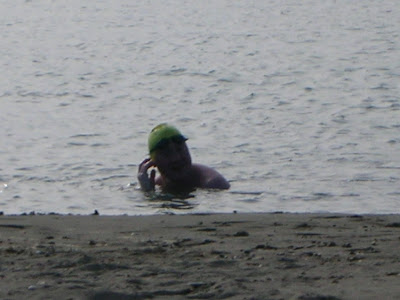 As I swum back towards Beccy, I just kept on swimming, and it was so shallow that my hand was touching the seabed, and scraping down the underside of my body at the same time. I just swum to shore laughing to myself, that tomorrow, our last day, must be a better day.

I came to shore, and Beccy hadn't realised how shallow it was because I was laying on the sea bed. The picture above looks like I am standing in a hole, but I was in fact just laying down. 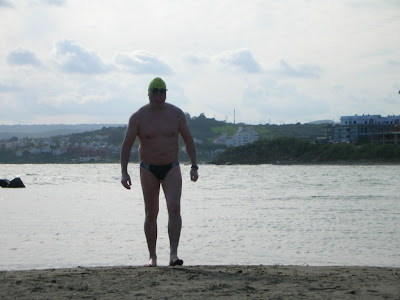 When I just stood up, and Beccy saw that the sea only just covered the tops of my feet, she roared with laughter and took the picture above. Enough was enough! I had managed only 1,300 Metres in two swims that day, and so it was time for a beer or two, or more!!!! Tomorrow was the last day, and I was going to make the most of it!

Be careful swimming off Felixstowe, you wouldn't want to bump into the unexploded bomb they have now LOST!

PM - Astonishing isn't it? I was watching on the tele but noticed that where the bomb was is completely the other side of where I swim. i.e. Up by the port. Hopefully there's no UXB's in the area I swim in!