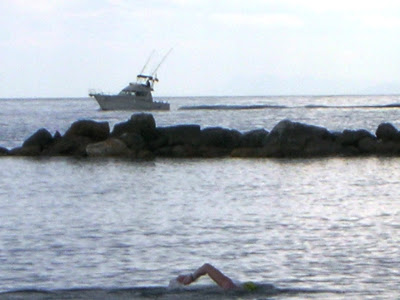 Above: The 2KM turning point on day 5 of my sea training in Estapona.
On day 5, I decided to do a 4KM swim which was to be 1KM more than the day before's disappointing swim! This time I was going to start at the apartments, and swim the first 2KM against the tide, then swim back to the apartments with the tide for 2KM.

When I got in it felt very cold compared to previous days. My temperature gauge bottomed out at 15.4 Degrees Centigrade. Although this is not "cold" in channel swimmers terms, your body becomes accustomed to feeling the temperature changes. From 18 Degrees on day 1 down to 15.4 degrees on day 5 is a big temperature change and it still fascinated me how different it was every day. I had not experienced these constant changes before. The water was also very calm due to what could clearly be seen as a storm brewing. 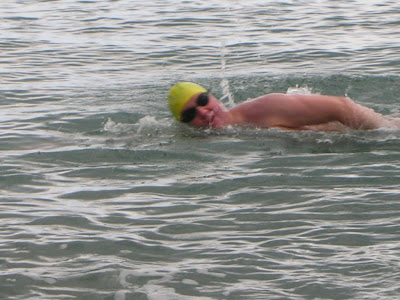 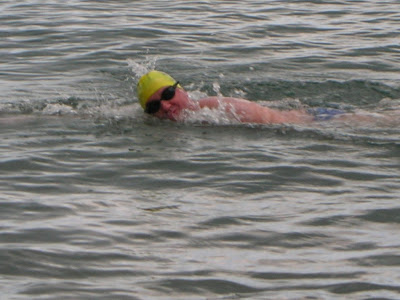 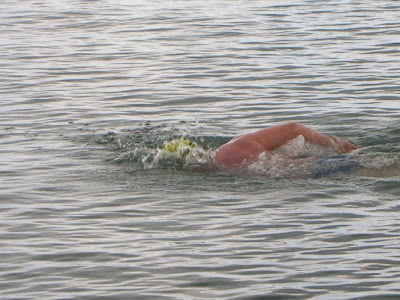 I turned at he 2KM mark and started to head back, watching all of the usual landmarks carefully as I swum. For the final 400 Metres, I sprinted at about 85% effort to keep up with Beccy who was walking very fast on the beach.

I finished the swim, got out and walked toward the promenade still panting. As I did, a French man walk slowly up to me giving me a slow hand clap saying "Bravo! Bravo!". He indicated that he had watched me swim the full 4KM and showed his appreciation, although neither of us could speak each other's language. He continued clapping as I walked off back to the apartment for a shower. It was quite humbling I have to say.