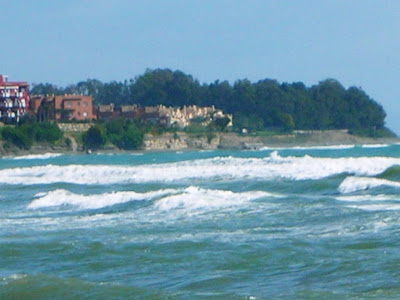 Above: The sea on Day 7 of our holiday was uninviting to say the least. However, I was there to swim, so swim I would!

On day 6 of our holiday, I looked out of the balcony window to see that there had been an immense storm the night before. However, the weather was fine so I walked down to the beach. When I got there, the sea was this horrible brown colour, and full of sediment. I couldn't make out what it was, and having heard that the Andalusian authorities were suing a company for dumping radioactive pollution in the sea, there was no way I was getting in there! I watched the sea all day and it didn't change so unfortunately I could not swim that day.

Next day, day 7, I got up to see a beautiful, cloudless, windless day. However, when I looked at the sea, I couldn't believe it. It was incredibly rough. I was getting really annoyed now. Radioactive yesterday, rougher than Aldeburgh in January today! I didn't care, I was getting in for a swim. 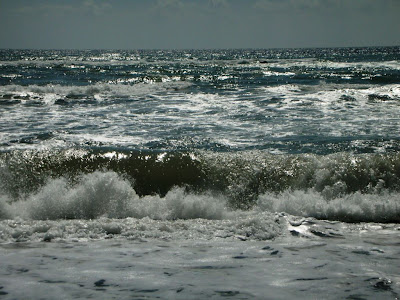 Above: Incredibly rough sea greeted us on Day 7 of the holiday.

Arriving down on the beach, I just couldn't get my head round things. There was no wind, it was warm and sunny but why was the sea so rough? I didn't understand it. Anyway, I got undressed, put my hat and goggles on, and pondered whether I was doing the right thing. The noise from the sea was ferocious. Tentatively, I got into the water and started to swim.

I have learnt to respect the sea, but not to fear it. "I've swum the channel" I thought. "Nothing to fear here. Just keep swimming". They say that you don't see the one that get's you. But I saw this bugger. 1-2-3 breathe right, there's Beccy on the beach. 1-2-3 breathe left, and there it was. A wall of water heading towards me from the left. It was reminiscent of the wave in the hit film The Poseidon Adventure. "I'm going to just ignore it" I thought. Yea, right. It was way above my head, and smashed into the left hand side of my body and face. It sucked me under, down to the bottom of the seabed. The force was just incredible, immense. My left goggle lifted off my head, my hat lifted up and I inhaled a complete noseful of Andalusian seawater through my nose and down my throat. Eventually, the wave passed and I bobbed to the surface with one eye in my goggle, the other out. "What the F#~k happened there?" I thought. I didn't know what day of the week it was. I had been in for no more than 5 minutes, and swum about 300 Metres, but that was enough. 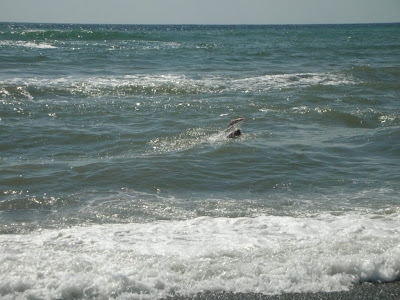 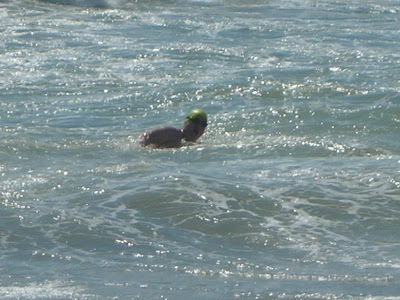 Above: Before the wave got me!

I headed for shore, in an attempt to get my bearings and try to breath again. However, as I got to the beach, I was hit from behind again, and was washed up onto the beach very unceremoniously. 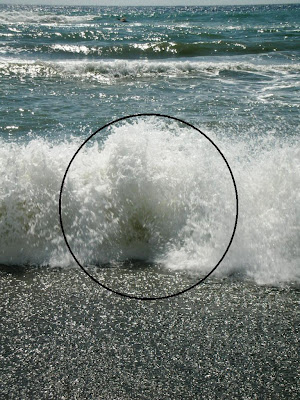 Above: Me (circled!) being washed up onto the beach. I think the orangy yellow colour was my head! 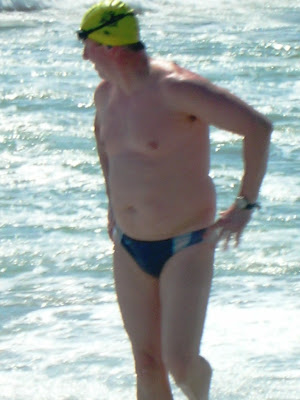 I managed to get out, still in shock, got dried and spent most of the day until the afternoon watching the waves. It had to die down soon didn't it? I was determined to swim again that day.

Should get yourself a surfboard a' la Russell!

PM - LOL! I could never have anything that big between me legs!!!

You could only dream!

Sorry to have lowered the tone of your post (again!)

Actually YOU did that, I just thought the sea looked more suitable for surfing than swimming!

LOL, Hoffy vs. The Sea. It was a bit rude of it to thwack you from behind on your way out as well as dragging you to the bottom. I think that's a case of The Sea: 2, Hoffy: 0. Make sure you get your own back next time :-D

The last photo is classic!!

this reminds me of when i was in brazil last year. when it was rough it was still ok once i got far enough out past where the waves were breaking, but i lost 2 pairs of goggles to the sea when smacked by waves on the way out/in. at least you had the sense to call it a day! and keep your goggles!

PM – Sorry about lowering the tone! Will stick to surfing/swimming!

Ruby – LOL! The last photo. I know exactly what I was thinking but can’t repeat it here!

Chris – Yes, but wait till the next instalment…