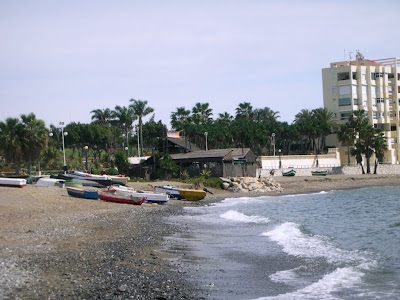 Above: The end of the first 1KM stretch, the turning point for a 3KM swim against the tide.

For day 3 of our swim trip to Spain, I decided on a 5KM swim. This was to start at our apartment on the beach, then an easy 1KM easterly swim down to the end of the bay with the tide, followed by a 3KM westerly swim along the full length of the beach against the tide, then a 1KM swim back to our favourite beach bar and restaurant with the tide again. That was my goal for the morning.

Getting into the water, I set off and watched my temperature gauge drop to 16.9 Degrees Centigrade. So the temperature had been 18, 16 and now 16.9 degrees C. I was surprised at how much each changed each day, but you could actually feel the difference on your body each time. I headed off with the tide and headed down to the end of the bay with Beccy as usual walking along the beach. 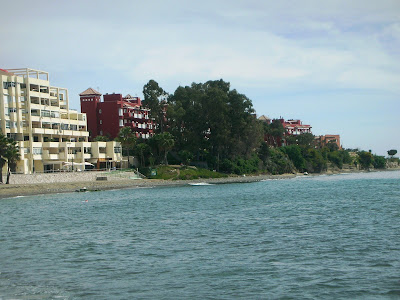 I reached the turning point in the bay (you can just see a little orange head in the photo above) spun round, and started the long swim against the tide the full length of the beach. Wow it felt different! It felt as though you weren't actually moving. I could see Beccy had slowed down her walking pace, but I just put one arm in front of the other and kept swimming. The sea was quite calm, so I just got into a good bi-lateral rhythm and swum. 1-2-3 breath right. 1-2-3- breath left etc., etc, all along the 3KM run. 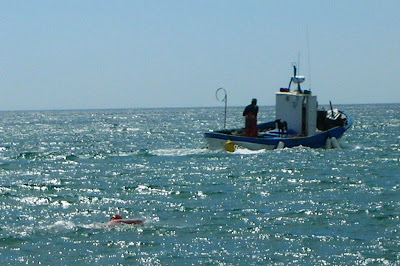 At about the half way point, I could see a fishing boat to my left, and kept a careful eye on it as it appeared to keep getting closer to me. Eventually however, it just disappeared off into the sun. I reached the pile of rocks where the pipe comes out into the sea, and swum out a bit to clear them as usual. 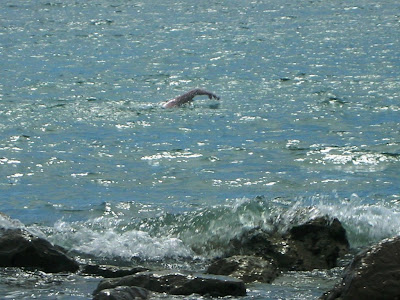 I knew the beach now and knew where I was each day by the buildings along the beach. A short distance after the rocks, comes an area which I used to call 'Beirut' each day. The following picture shows you why. 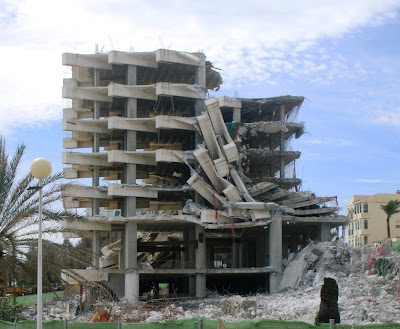 I'm not sure of the full story, but apparently the people who were building this building, went into liquidation, and during the Mayoral elections, the new Mayor said that if you voted for him he would pull it down. He won, and so he is pulling it down. However, I had never seen a building taken down like this before, they just tore chunks off it with a digger, hit it, did anything they could to knock it down. When I reached this point each day, I knew it wasn't too far to go to the rocks at the end of the bay. 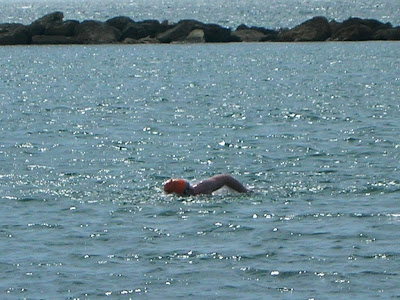 Reaching the rocks, the 4KM point of my swim, I turned round and was relieved to be swimming with the tide again. The 3KM swim against the tide was tough, but was excellent channel swim training. I headed down to the spot where our favourite bar was and came ashore. 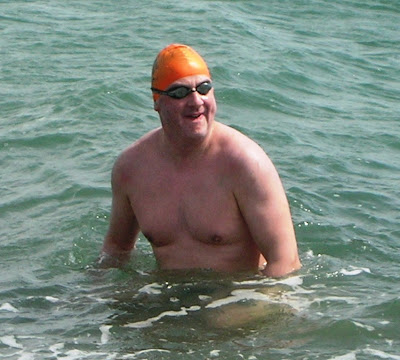 This was a very satisfying 5KM swim, and it now brought my total for the 3 days to 12KM. I was very pleased but I didn't realise then that this would in fact be my longest swim of the week. More will follow...